The Power of Touch

By Richard KofflerOctober 25, 2020No Comments 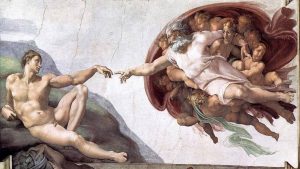 The sense of touch has immense power. This is reflected in the fresco The Creation of Man in the Vatican’s Sistine Chapel where Michelangelo painted God stretching out a hand towards the hand of Adam to transmit life. This is notable in that touch is depicted as not only necessary for the survival of the human race, but for a person to become whole. As Adam’s body is already formed, touch added the soul and spirit without which the body could not function.

The historical primacy of touch is reflected in language conveying communication such as on the other hand or keep in touch, cognition such as can you grasp the problem or handle the situation, and personality such as someone who rubs you the wrong way or a touchy personality. The hands are remarkable and have been called a person’s “outer brain” 1. This fascinating sense has important implications, yet it has lacked the attention it deserves.

Why do people touch? Touch uniquely communicates an object’s texture, softness, weight and temperature 2,3,4. If an object varies on one of these attributes, it is more likely to lead customers to touch before making a purchase decision. For example, the most chilled bottle of Chardonnay may be chosen if a customer plans to drink it soon. A customer may lift up several laptops when purchasing one for travel to select the lightest. And determining the texture of a sweater or the softness of a pillow may be critical to the purchase decision.

While we know that people touch to get product information, what may be less obvious is that people also like to touch for the experience of touching 3,7. They enjoy the interesting texture of paper, the silkiness of a soft shirt or the luxurious feel of cashmere. Even if they aren’t planning to make a purchase, the touch of some products rewards the toucher with a positive sensory experience. They are simply touching for enjoyment.

We value what we own. Psychological ownership or the feeling that something is “mine” 6,9 can tie someone to an object in an emotional way. If someone can control something, even physically control it through touch, they are more likely to feel ownership. And this boost in psychological ownership increases how much they are willing to pay for an object since ownership leads to valuation 8 and to unplanned purchases 5. So merely touching a product increases a consumers’ feeling that it is theirs, which increases the value of the product for them.

Touch is critical for consumers and should also be so for manufacturers. Manufacturers invest heavily to deliver the right product feel because it powerfully influences consumers’ decisions. Touch can trigger emotional responses that intensely influence consumers positive and negative perceptions about products, often subconsciously. Touch connects a person to an object. A simple touch connection results in increased valuation and a willingness to pay more for the touched product 8,10.

Touch is also a powerful communication tool. A touch can convey and define a brand identity for consumers and is an underappreciated way to differentiate an offering in a crowded marketplace. Consumers attend to and notice touch in the environment. A consistent feel can align with consumer expectations and increase brand loyalty. Elements of touch can convey quality, warmth, competence, safety, sustainability and luxury.

Every product component touched by consumers is important and nothing should be taken for granted. Touch conveys information and meaning. Mapping the consumer touch experience to understand what consumers are perceiving as a result of their multiple tactile interactions can be illuminating. Besides an actual product touch, this may include packaging, paper type used, seams, edges, buttons, clasps, and handles. Whenever tactile interaction is present, the power of touch can be used as a tool.

From product information to an increased feeling of ownership to higher valuation and perceptions of quality, the power of touch is immense. Since customers are seeking experiences, touch can be employed to add richness to the customer experience. And, as a result, the consequences of using touch strategically are extremely powerful.